After leaving Oxford and taking the trains and underground, we finally got to our hotel. We were centrally situated near the Tower of London, and although it was a budget property, it was very clean and comfortable. We dined at a small Indian restaurant recommended by the front desk at the hotel, and it turned out to be my favorite meal in all of Britain. The Empress is located on Leman Street, and it was rather empty when we arrived on a Monday evening. After we looked through the extensive menu, Russell, our server, asked what dishes we liked, and recommended dishes that weren’t on the menu, but rather his personal favorites. Lamb curry made with baby mangos, Dhaka Murgh (chicken stuffed with spinach, glazed with honey and cooked in a tomato-based curry), king prawn butterfly, tandoori chicken and chicken tikka. Oh my god, my mouth is watering just thinking about that meal again. After our meal, we had a nice chat about the English football teams, the upcoming Man U v. Chelsea Champions League game, and Tottenham’s and Arsenal’s seasons, all of which I’m sure contributed to a fully satisfying dinner. 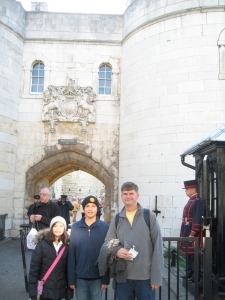 The next morning, we headed out bright and early to the Tower of London. We got in right at 9:00 when it opened and toured a la audiophones. We had wanted to take a tour with a Yeoman Garder but those didn’t start until later, and we were eager to be on our way. Two words: C R O W N J E W E L S. Those were awe-inspiring, astounding and amazing. They even impressed Brad, who I think is a rather tough customer. The crowns and sceptres were intricate pieces of art and history combined. Unfortunately, we were banned from taking pictures for security reasons but it actually allowed you to focus on the experience and pieces before you, rather than being distracted with taking pictures. I told Brad that I’d like at least one piece of jewelry like that and he said he’d see what he could do. I’m not holding my breath but it was a nice thought anyway. After the Jewel House, we also toured the Torture Exhibit and the Prisoner Exhibition, toured a recreation of the room where Sir Walter Raleigh was imprisoned for years, and listened to stories of those few privileged aristocrats and royalty who were executed inside the walls. We spent a nice satisfying 2 hours or so wandering about the Tower of London, appreciating its history and beauty. 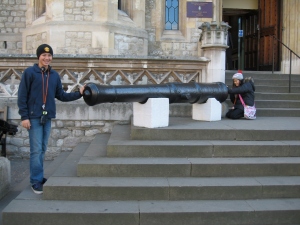 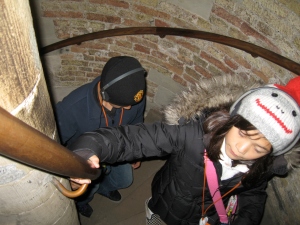 Onward with our whirlwind tour, we hopped on the sightseeing double-decker bus and toured the many famous sights, appreciating them from afar: Buckingham Palace, Westminster Abbey, Big Ben, Parliament, Trafalgar Square (we were stuck in a traffic jam in a roundabout there for 45 mins; argh!), Piccadilly Circus, Marble Arch, London Eye, Sherlock Holmes Pub, and National Gallery. We easily could spend nonstop weeks filled with wonderful things to experience, but unfortunately we lacked the luxury of time in this trip. 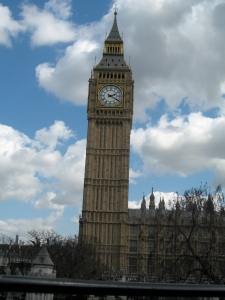 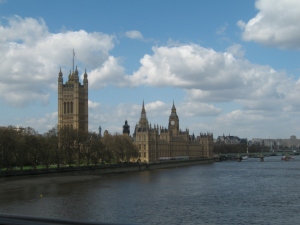 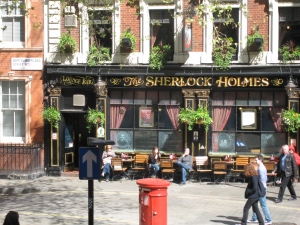 We then walked through Leicester Square (boarded up for London Olympics 2012 construction. Our London Angel, Helen, thought they were putting in the beach volleyball court there, as it seemed they were getting ready to move the trees), through the Soho area, along Oxford Street, picked up tickets to watch the Queen musical, “We Will Rock You!”, and raced the clock successfully to get to Loop, a London LYS, in Islington, another part of town. Imagine my mad yarn shopping powers being put to test in two minutes time. I emerged successful and happy with a Loop shopping bag and some beautiful indie yarn. Ahhhh, more sweet memories.

With only 30 minutes to spare before the show started, we stumbled upon a Hong Kong noodle house, Noodle Oodle (formerly called Noodle Inn) with a guy making handmade noodles in the window, next to the hanging char siu, roast pork and duck. Be still my heart! We popped in and asked the waitress if she could get us in and out in 30 minutes so we could get to the show on time. Not a problem, she sat us at a table in 3 minutes; we ordered our noodles with char siu or duck and Wes ordered his steamed Shanghai dumplings (the yummy kind with soup that leaks out once you bite into it) which takes 7 minutes longer; and we were slurping down noodle soup within 5 minutes. Delicious home-cooking inspired comfort food in the least expected place! It’s located on Oxford Street just next to the Tottenham Court Road tube station. Cheap, not a fancy place to hang out, but good satisfying food, especially on a cold day.

“We Will Rock You!” was recommended by my sister and her family, who saw the show three years ago, and it was a perfect recommendation for us. We splurged for close-up tickets, and enjoyed the music of Queen, albeit with a rather weak story line. Even so, we loved watching the live singing and dancing performances. Squid was entranced by the female performers, and I could hear Wes laughing at the jokes (Who were Tinky Winky and Dipsy? And why did they say, “Eh oh?” In our family he is known for his great obsession with the Teletubbies, when he was a toddler.) The show ended the with a huge, rousing performance of “We Are the Champions” and I promptly whispered to Brad, “What happened to Bohemian Rhapsody??!!” I’m such a sucker and easy target. That was the encore performance, and the true highlight was when Brian May came out and performed his great guitar solo. We were seated amidst a sea of German high-school age students who mostly seemed to understand the show. However, when they performed Queen’s most famous hit, they seemed a bit bewildered at all of the reaction and singing along from the audience. I’m glad to say we have appropriately musically-educated our kids and instilled a love of Queen well before this trip. We loved the performance, and our kids loved the performance. This is the stuff that memories are made of, and it was a great way to end our first full day of London. 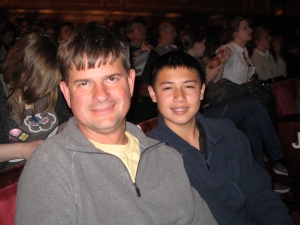