Brad and I did a day trip through Oxford 21 years ago, and loved it there. When we were deciding on our itinerary for the trip, we were weighing whether we had the time for Oxford or not. On the one hand, an extra day in London could easily be filled with all there is to do there. On the other hand, how could we not expose the kids to an educational institution of higher learning which has gifted the world with wonderful minds? Higher education won out, but we wisely sold it to the kids as seeing Harry Potter sights.

We had all our not-insignificant luggage with us as we alighted from the train, and schlepped it to a hostel which babysat your bags for the day. Walking through the narrow streets of this beautiful older town, we found a great little sandwich shop which made these delicious crusty paninis which were also customizable. We have really enjoyed eating at the small mom-and-pop type of cafes and shops throughout our trip, and this was another, boasting friendly faces behind the counter.

Fortified, we walked back to the train station to hop on the red double-decker sightseeing bus that takes you about the different places, features live commentary and lets you hop on and off. We rode the bus once around the tour and on the second loop, hopped off at Christ Church College. Christ Church is one of the biggest colleges at Oxford, boasting notable alumni including William Penn and Charles Lutwidge Dodgson (Lewis Carroll was his pen name). The Great Hall, also their dining hall, was the inspiration for Hogswart’s dining hall, so we snapped many pictures there. We tried to tour the Bodleian Library, where library scenes for some of the Harry Potter movies were shot, but unfortunately, they were closed. And that was the end of our too short Oxford trip. We still had to hop on the train for the hour ride back to London. 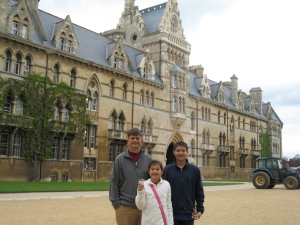 Believe it or not, Oxford is a small enough town where they do not have a yarn store, so sadly, no yarn adventures there. I’m sure I’ll make up for it in London though!